Another Oh Hae Young is yet another tvN success! 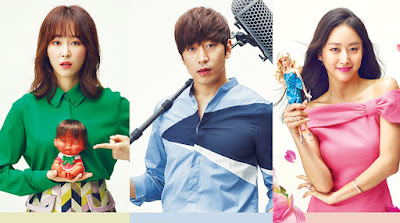 If you can be in love with a drama, I'm completely and madly in love with Another Oh Hae Young. I wasn't sure about how much I'd like this drama when it first started, but as it picked up momentum I noticed that I was laughing and crying in every episode—always a good sign that a drama has what it takes to keep viewers engaged. Plus, I was quite intrigued by the unexpected spiritual aspects of this drama as it unfolded.

I love Eric Mun in his role as the self-involved and deeply wounded Park Do Kyung, and Seo Hyun Jin twists your heart with her portrayal of how it feels to be constantly compared to someone else (the pretty Oh Hae Young) and always come up short. I hurt for her in every episode. Jeon Hye Bin subtly reveals unexpected aspects of pretty Oh Hae Young's character as well as her flaws.
To keep things from getting too heavy, Do Kyung's sister totally fills the bill with her weird double life between work and home, and the second lead couple is so darned cute and silly that you just can't help but laugh.
Plus, I'm a big fan of Lee Han Wi and Kim Mi Kyung, and as the regular Oh Hae Young's parents, they don't disappoint in their delivery of either comedy or drama.
I think the actors in this drama have good chemistry and it shows.
It's no wonder that Oh Hae Young Again is, at the time of this writing, the fifth most popular drama on tvN, ever!
"Do you smell anything burning? My heart is burning" for Another Oh Hae Young!
Enjoy Another Oh Hae Young on Viki.com