Mad for Vlad: The Chronicles of Vladimir Tod

Posted by Carol Holaday
Tweet
Pin It
Okay I admit it.  I'm becoming a minion.  A minion of Vladimir Tod, that is.  I can't tell you how many times I picked up the first book, Eighth Grade Bites, in my local bookstore and thumbed through it thinking it's probably for boys. But I kept picking it up every time. I was intrigued by the idea of a guy's take on being a vampire. 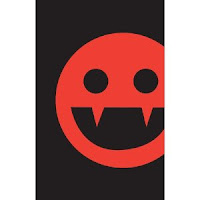 Then I saw an interview that Heather Brewer and Rachel Caine did with each other that they posted on Amazon.  Maybe it was her mention of all of Vlad's minions.  Maybe it was the AWESOME mega pink streak in her hair.  Anyway it made me decide it was time to read The Chronicles of Vladimir Tod.  And now I'm mad for Vlad!

The Chronicles of Vladimir Tod follows a teen vampire, who lives with his guardian Nelly, throughout his high school years. Nelly just happens to be a nurse with access to expired blood (a very handy thing if you're feeding a growing vampire teenager).  Vlad's dad was a vampire and his mom was human, a forbidden arrangement which cost them their lives.  It is his mixed parentage that makes Vlad a very unusual vampire, unusual enough that there are those who want to do some rather unpleasant and potentially deadly things to him.  With the help of Nelly, and his best friend  and drudge slave Henry, Vlad manages to cope with the normal high school issues while he learns how to be a real vampire—if he can stay alive long enough.

I don't want to spoil the stories by giving too much away, but suffice it to say they are funny, scary, sad, exciting and a great read for all teens (and even oldies like me).  Check out Heather Brewer's website to learn more about Vladimir Tod and find out how to get cool FREE STUFF at www.heatherbrewer.com.